You've Taken Your First Step Into a Larger World

Well, here goes.  I know that it seems like everyone has a blog out there these days talking about, quite literally, everything (confession: I, too, have another blog where I post my homilies that I preach along with other personal related topics: Roamin' Catholic).  So, it seems like all one needs is a blog to be some sort of expert on any said topic (if it's on the internet it must be true, right?).  So you might think I'm going to end up doing just the same thing as everyone else out there, being an expert on everything and nothing because of this blog...and you'd be absolutely right.

The idea behind this blog that Sean Heller (a great friend of mine and fellow Star Wars fan) and I are putting together here, "Club Bwua'tu" (a name taken from the Star Wars: Fate of the Jedi series for an organization within the Galactic Alliance trying to uncover the various conspiracies bent on total galactic anarchy - see the wookieepedia) is for Sean and I to have an outlet where we can discuss what we think is interesting and fun regarding the exciting world of Star Wars with a Catholic perspective (whether overt or not in our posts).  I hope it to be a fairly geeky way for us to share our perspective on the new and exciting things that are currently happening in the world of Star Wars.  Additionally, this seems like an opportune time to begin such an online journey in conjunction with Star Wars: The Force Awakens coming this December.  So fair warning for you all, you know what we're planning on doing here and if you're wanting to follow along, great!  If you're laughing and shaking your head at my geeking out to Star Wars and don't follow us, that's great too, we won't be offended.


So a bit of my backstory for me...
I have loved Star Wars ever since I saw Star Wars Episode II: Attack of the Clones in theaters back in 2002.  Since that awesome introduction I wanted more Star Wars and watched the original trilogy and also began to read the novels, my first one being "The Courtship of Princess Leia" by Dave Wolverton.  I remember feeling like those novels were my some of my closest friends in junior high school and high school.  We had a mandatory reading period in high school each day for 20 minutes and I would immerse myself in the Star Wars universe, while the rest of my classmates groaned that we were "required" to read.  I also remember specifically going on vacation one summer without my older brother (who was working that summer) and I felt alone with him.  I asked my parents if we could stop at a bookstore and I picked up "Star Wars: The New Jedi Order: Destiny's Way" and that novel was my way of dealing with missing my brother and yet I still had a great time visiting Yellowstone with the rest of my family.  It was also my first introduction to the New Jedi Order (I know I jumped into the plot 3/4 of the way through, but I did go back and read through the whole series!).  The EU has been a big part of the leisure aspect of my life so the news that the EU would be relabeled as "Legends" hit me a bit hard (see this article on Starwars.com), I still really wanted to continue the story with the "big 3" of Jaina, Jag, and Ben (plus I was really excited for Christie Golden's Sword of the Jedi trilogy that, alas, is not meant to be).  That being said, though, I am super excited for The Force Awakens and will always be a Star Wars fan following where the new canon leads.

In high school my love for Star Wars was pretty much confined to my family.  My dad enjoyed the movies and my older brother also shared a liking for Star Wars (although he is much more of a Trekkie).  Other than them, I couldn't share my love for Star Wars with anyone else, so I was content to read the novels and badger my older brother with the plots that he knew little of, lamenting Jacen Solo's descent to the dark side to him.  This was all to change as I finally discovered a use for Twitter.  I had gotten a Twitter account a couple years ago, but never quite felt I knew what I was doing with it, other than tweeting random things...as such, what a joy it was to discover that Twitter was my ticket to joining the Star Wars fandom at large.  Last November with the impending release of the Teaser Trailer to Star Wars: The Force Awakens, I found a Skype Chat via twitter, hosted by Star Wars Podcasters (Far Far Away Radio and The Forecast), where we stayed up all night hoping to watch the release of the teaser trailer at midnight Pacific Time.  But, unfortunately it was released early the next morning.  Even so, the Skype chat was so cool because I had connected with other Star Wars fans across the country all of whom I did not know.  Yet we all got together because of a shared interest and love for Star Wars and I had a blast!  And I finally understood what Twitter was for me.  It was a way for me to connect to the Star Wars fandom in ways I never could before.  Twitter finally had a purpose in my mind. 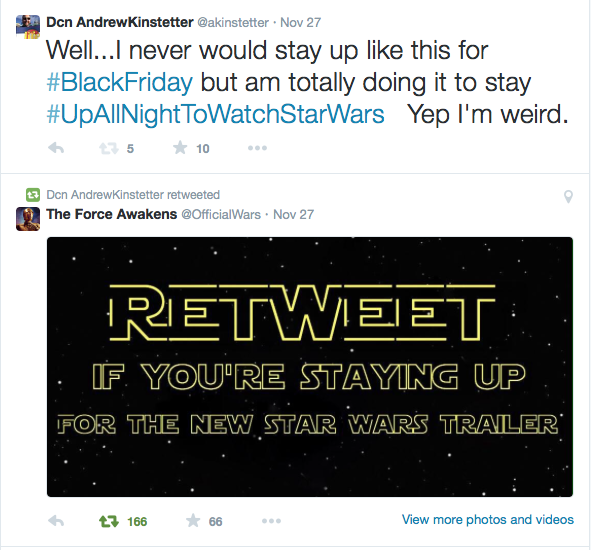 Since then I have been a listener to the above mentioned podcasts including Star Wars Bookworms (which is probably my favorite because I am such a Star Wars literature fan!) and my family and friends do think I'm a bit weird in my passion for Star Wars, but in my defense, they have their own passions that I find strange (like investing a lot of energy and emotion into the many different sporting events).  Star Wars is my fun hobby that helps keep me just a little bit saner in my busy life as a Catholic deacon and soon to be Catholic priest (May of 2016).  It is my chosen form of healthy leisure :) 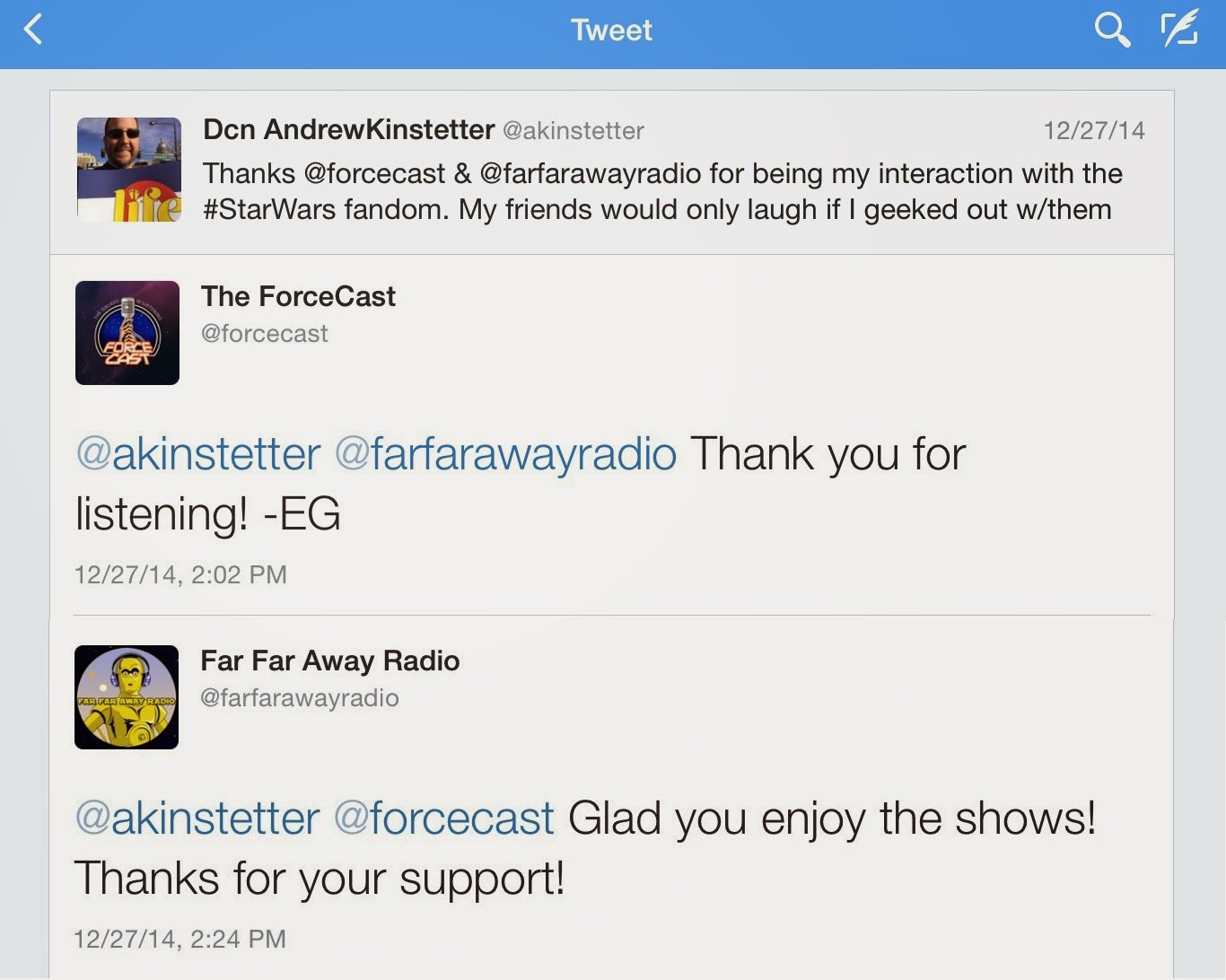 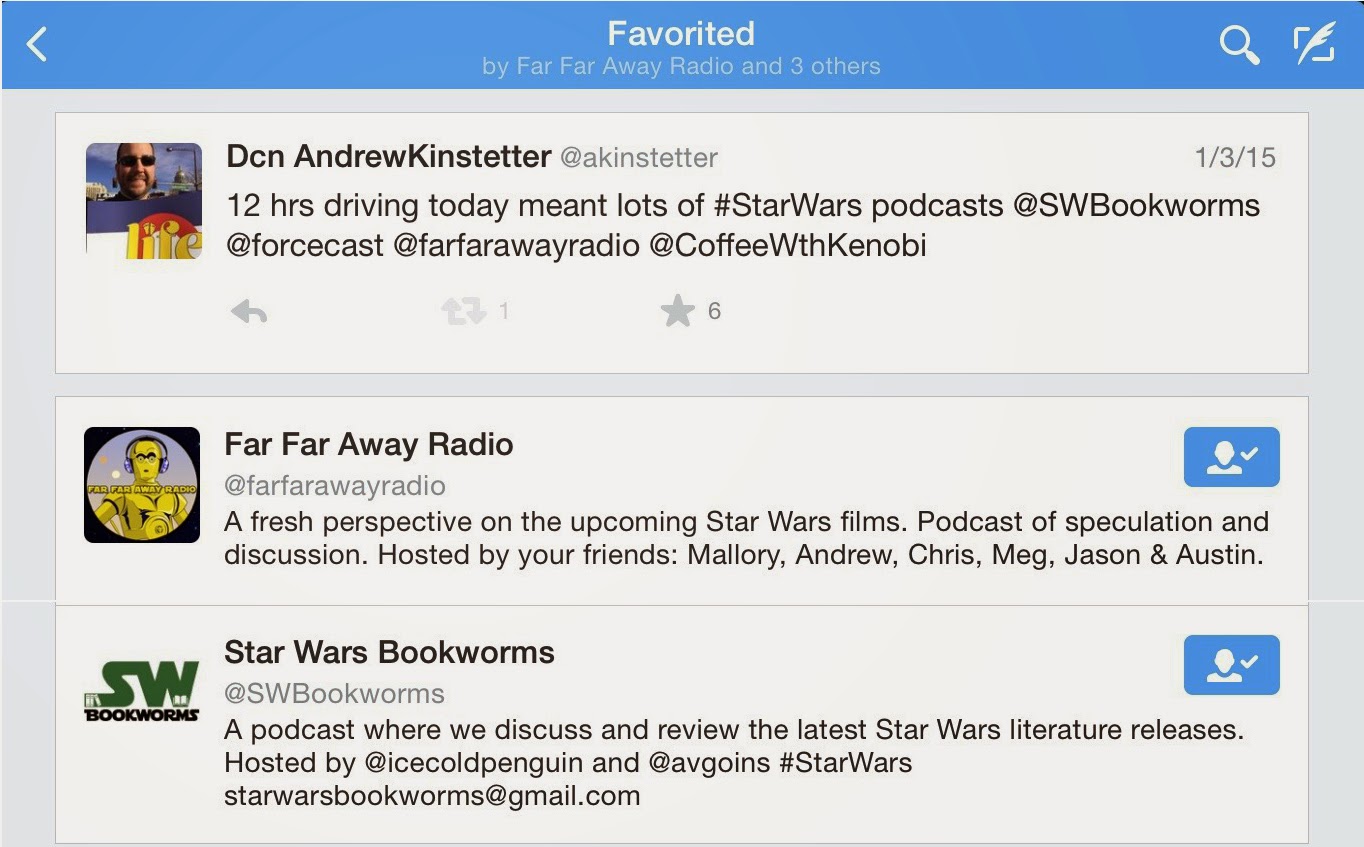 With that, I have now taken my first step into a larger world.  From Twitter to Blogger...journeying to Star Wars: The Force Awakens and beyond.
Posted by Unknown at 7:01 PM