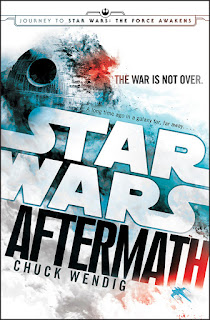 Star Wars: Aftermath, with such incredible hype and expectation among Star Wars fans everywhere, I need not even say I was excited for this book, but I was excited for this book.  Excited enough that I pre-ordered it on Amazon and on #ForceFriday I couldn't wait for it to be delivered so I ended up going to Barnes & Noble to buy it before the box was delivered.  My intention is to give the Amazon ordered book to my friend and fellow Star Wars blogger of this blog, Sean Heller (ironically the Amazon shipment experienced a transit delay by 1-2 days so it worked out that I went ahead and bought a copy).  I finished reading Star Wars: Aftermath last night.

This post is a review of the Star Wars: Aftermath with mainly just my stream of consciousness regarding the novel.  I did not read any reviews before reading Aftermath, the only hint I had in what was to come was the sanctioned preview that StarWars.com gave us in July.  This post may contain minor spoilers, so read at your own risk.  In this post I do not wish to be harsh and negative but I plan to speak my mind. All opinions are my own and the truth is the truth.

First thing I noticed about Aftermath is Chuck Wendig's writing style.  He writes Star Wars: Aftermath in the third person present tense and uses short pointed sentences with many colons, parenthetical notes, and similes.  From what I've gathered from other reviewers, this seems common to Wendig's writing style in general.  I have to admit that I found it jarring and didn't appreciate it.  I have never seen the present tense used in Star Wars literature before and rather than settling into the tense and feeling the urgency it created (which for many readers it accomplished just that and was successful), I kept stumbling over the tense and did not like it.  I also am used to a longer, more fluid and descriptive writing style, so Wendig's short blocky structure also threw me off.  I felt like I was reading stage directions and had to reorient myself each chapter (which was very often).  That being said, I don't wish to be harsh, I'm sure Wendig's style works amazingly well in his other novels (I have not read them) and it did add a sense of urgency, which I did pick up on as well.  I just didn't feel it worked well for this book.

I was hoping to see more of Luke, Han, and Leia.  Han and Chewie show up very briefly and I wanted to follow them, but couldn't.  Wendig introduced us to so many new characters that I had trouble keeping up and there was typically only small references to Luke, Han, and Leia.  I wanted to follow their stories post-Return of the Jedi, like the Legends novels did.  In the end this novel was great in that we got introduced to a variety of new characters and I got to try to guess which characters would play into the stories of the others and was pleased to see them all connect to the greater plot in the novel.  I would have liked to have gotten more character development, however, because I still don't feel like I know the main characters very well and I lack an emotional connection to them.  In other words, I didn't care about them.

Now for my biggest issue with Aftermath.  I did not appreciate the introduction of the LGBT characters whatsoever.  Being a Catholic Deacon heading into priestly ordination in the Catholic Church I have spent many years studying Theology, studying sexuality as seen in God's plan (which is reflected in the natural order of the world; in nature) and interacting with and being really good friends with those who struggle with same sex attraction who are trying to live lives of chastity and in accord with God's plan (celibacy).  That being said I understand well the reality of same sex attraction in many in our world today.  It is very real thing and must be understood properly in order to bring those persons true joy and happiness.  True joy and happiness is found in authentic love, which can never ever be equated to a sexual relationship, which our culture tends to suggest.  Authentic love as revealed by Jesus Christ is this: "Greater love has no man this, that a man lays down his life for his friends." (John 15:13, RSV).  Those who have same sex attraction are called, just like everyone in this world, to love authentically (which may or may not include a hetero-sexual physical relationship).  Authentic love does not mean sex.  Marriage as God intended it to be is between one man and one woman and it has, by its very nature, a unitive and a procreative aspect.  Marriage unites a couple and produces children.  Neither can be separated or else marriage becomes selfish.  Gay marriage breaks the essence of marriage; gay marriage is not, and can never be, life-giving (it ceases to produce children).  I preached a homily about this reality of marriage, and you can read it here to understand more.

Now I am not suggesting that those who have same sex attraction should never be included in novels, because I'm not.  That is a reality in our world that can be real in novels too.  I am saying that those who have same sex attraction in novels should not be used in a way that promotes an agenda, I do not know Wendig's reason for including them so I am not implying Wendig has an agenda here.  But what I do see is that Wendig portrays a gay marriage (two women) as completely normal and natural.  He also reveals that one of the major male heroes of the novel is not attracted to women.  Both of these aspects of Aftermath seemed to be awkward and not at all necessary to the story.  They seemed to be added only as a way of revealing that gay marriage and a gay hero exist in Star Wars.  It seems to be a way of "normalizing" gay marriage and the gay identity as something normal, even admirable.  I mean, it's in Star Wars and isn't portrayed as wrong or out of the ordinary, so it must be good, right?  No.  This is not healthy.  Same sex attraction is a very real thing, but it is not natural and shouldn't be admired, nor promoted as something healthy and normal (again with the proper understanding that in itself the same-sex inclination is not sinful, but acting out on the inclination is; also recognizing that same-sex attraction is a disordered desire, just as a lustful inclination in any sense, heterosexual or homosexual, is a disordered desire).  I was disappointed to see that in a Star Wars novel.  Star Wars should be a magical place in a galaxy "far far away" and this just brings it closer to earth and less magical.  Even the seemingly obvious reference to a Star Wars Settler's of Catan board game in the novel seemed too close to home.  I want to go to a galaxy far far away, not stay here on Earth.

Anyways, long story short, I didn't hate the book, in fact, I liked many parts of Star Wars: Aftermath by Chuck Wendig.  I loved seeing the galaxy after Return of the Jedi, in little bits and pieces from many different stories.  I am excited we are moving toward Star Wars: The Force Awakens and I'm hoping I caught some of the hints that point to the movie (I may or may not have).

This blog post is not meant to attack Chuck Wendig or hurt his reputation. I think he is a good author and I just had thoughts on his novel, Star Wars: Aftermath, that I wanted to share. In no way do I condone or encourage attacks on Chuck Wendig as an author because Aftermath is not the Star Wars EU or for any other reason. That is malicious and unwarranted and I want everyone treated with the dignity and respect they deserve as human persons who are uniquely creative as authors too.
Posted by Unknown at 9:38 AM