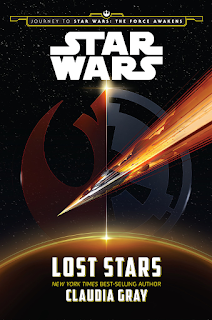 My first few thoughts as I picked up Star Wars: Lost Stars by Claudia Gray:  A young-adult (YA) Star Wars Romeo and Juliet novel?  Am I too old for this?  Well, I read The Hunger Games and they are in the YA genre, didn't I?  Yes.  How is this different?  Hmm...well, this story is focused around a romance and I'm a guy.  Does that matter?  Only if the story isn't good, then it would definitely matter.  So...do I want to risk it?  YES, it's Star Wars!  And then I dove right in.

Note: Spoilers are discussed below so if you haven't read the book and don't want to read spoilers, don't read any further.  Finish the book and then come back to read my review.

Immediately I found I cared deeply for the characters, which is a high mark for the book already.  If an author can create believable characters that tug at my heart, then I'm sold.  From the first page, I felt like I could relate to Thane and smiled as the events of Thane meeting Ciena for the first time were portrayed.  It brought me back to my own time in Elementary School.  As I journeyed with Thane, I felt his pain as if I was a friend standing by that couldn't do anything as his father physically abused him and, conversely, cheered for him and Ciena as they grew to be good friends and awesome pilots.

I was pleased to see them head off to the Academy on Coruscant so we could get a glimpse of life on the famous planet.  I found myself relating their time in the academy to my own experience of high school (and I imagine to most peoples' experience in high school).  The academic competition, the awkwardness of hormones, the fragility of friendship that isn't rooted deeply, and the broken friendship which would take years to heal were all things that I had also, to some degree, experienced in my own life.  Because of this reality, I was hooked even more deeply into this story because I wanted to see how Thane and Ciena dealt with the brokenness of their pasts.  Thane had authority issues stemming from his broken relationship with his father.  A reality that many have in our world today!  To that extent Thane struggled to believe in the goodness of those in authority over him at the academy, almost pushing too hard and risked getting himself and Ciena dismissed from the Academy.  Ciena had a more wholesome family life growing up, rooted deeply in the honor of her culture.  Honor meant everything to her, which played a role in how she viewed and acted in the novel.  This honor prevented her from the seeing the corruption that was in front of her because she believed the Imperial authorities also had the same honor (which most didn't).  This honor ultimately led to her never-wavering decision to be an officer in the Empire, even after seeing its corruption.  Thane, on the other hand, couldn't bear the atrocities he witnessed and eventually joined the rebelling, putting him and Ciena on opposite sides of the war, unable to be together.

This was such a great setup to the Romeo and Juliet archetypal story that Claudia Gray was writing.  Rather than put them on opposite sides of the conflict to begin with (which happens in Romeo and Juliet), Gray had Thane and Ciena grow up together, become close friends, and then find themselves drawn to opposite ends of the war, while still trying to love each other.  Thane and Ciena were friends first and not only friends, but best friends.  This is the way a romance should be.  Romance should never be divorced from friendship (not that all friendships are romantic because most are not, but a relationship leading to marriage should always be grounded in a friendship).  I was very pleased to see this relationship start as best friends.  In writing a Romeo and Juliet type of story, it also meant that Gray had to reconcile (or try to reconcile) the fact that these two people love each other and the galactic conflict is keeping them apart.  In Romeo and Juliet there were only a few outcomes of their personal situation: running away (getting out of the system that is preventing the relationship), revolution (change the system that is preventing the relationship), or suicide (the removal of oneself entirely from the system).  Romeo and Juliet, of course, try to run away, but they both end up committing suicide (the Shakespearean tragedy).  For Thane and Ciena, running away isn't an option because Ciena lives a life of honor and running away would be dishonorable.  Suicide seems to be an option (Ciena accepts this as her way out near the end of the novel, but Thane prevents her in the nick of time).  So, ultimately, suicide is not an option.  Revolution, lastly, seems to be the answer for Thane and Ciena.  They must change the system, overthrow the Empire (at least Thane believe so).  The end of the novel leaves this last piece of the story in limbo and we don't find out what eventually will happen to Thane and Ciena (not yet anyways).  Although Ciena is away from the Empire, she is a captive held by the New Republic when the story ends still leaving these two star-crossed lovers on opposing sides of the continuing war.

I really enjoyed this novel, it was written at a quick pace that kept my attention and the characters were believable.  I loved the many cameos and insights into the events in the Original Trilogy!  I kept grinning every time one came up (opening scene aboard the Devastator, the imperials sent to Dantooine, Hoth, Wedge Antilles, Dak Ralter, Mon Mothma and Admiral Ackbar to name a few).  I also really appreciated the fact that this novel brought humanity to the Imperials.  The Imperial officers and pilots had names, backgrounds and their own stories, which made me much more empathetic to the Empire as a whole and recognize there were good people in the Empire.  It made the conflict between the Empire and Rebellion not as black and white as I used to view it.

Another aspect of the novel that was great was the implicit reference to God.  Ciena points out one of the ways in which we know that God exists, through the natural world (she is, of course, referring to the existence of the Force, not God, but the same principle is applied to God).  Ciena says, "Believing in something greater than ourselves isn't crazy.  It's proof we're sane.  Look how vast the galaxy is.  Don't you have to admit we can't be the greatest power within it?"  (pg. 292).

Lastly I want to briefly address some of the issues I had with this novel because there were some.  I did not like the passing reference to Thane perhaps being gay (even though it was in the context of a joke), the passing reference to gender change and the explicit references (not obscene) to the sexual act.  These things in the novel added nothing to the story and are not needed whatsoever to tell a compelling story about the relationship between Thane and Ciena; sex is not needed to tell the story.  Additionally, it spoiled the characters' purity before marriage, which our culture doesn't care about anymore.  The sexual act itself is not something that (to my knowledge) has never been directly referenced in Star Wars novels (it's of course implied, but never directly like it was in this novel).  The direct reference to the sexual act is unfortunate, in my opinion, because Star Wars is supposed to be this fun, innocent and magical galaxy, telling the story of good versus evil that is appropriate for all ages.  With the sexual act being casually thrown out there as if it were ordinary, it damages the sacredness of the marital act within marriage where it is supposed to be (Thane and Ciena were not married).  None of these topics should be referenced this casually in this galaxy far far away (I took similar issue with Chuck Wendig's Star Wars: Aftermath novel).  Because of this, I am worried about the direction of the new Star Wars novels.  If sex and sexuality are going to be a continuing theme (even if it's only in passing) in the novels, I will have to start to think twice about reading them.  Star Wars is not the place for this and I am disappointed with the seeming agenda in these new Star Wars novels to promote sex outside of marriage and the LGBT identity as commonplace and normal.

Overall, though, I really enjoyed this book.  If I could cut out the 5-6 sentences that referenced sexuality, it would be a fantastic, wholesome, novel.  The characters were great, I related deeply to them and rooted for them.  I also loved the revelation we got at the end as to how the Star Destroyer ended up crashed on Jakku.  It adds a whole new light to the teaser trailer for Star Wars: The Force Awakens.  Well done!
Posted by Unknown at 3:14 PM