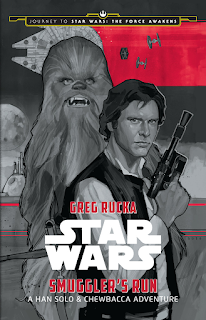 Star Wars: Smuggler's Run is, by far, my favorite novel released during the Force Friday event on September 4, 2015.  As far as the Journey to Star Wars: The Force Awakens novels go, I have read Star Wars: Aftermath and Star Wars: Lost Stars with Star Wars: Weapon of a Jedi and Star Wars: Moving Target still sitting on my list of "to-read" novels.

Minor spoilers below, so read at your own risk.

Smuggler's Run was a fun, action packed adventure following Han Solo and Chewbacca on a mission for the Rebellion to the planet Cyrkon to rescue Ematt, a rebel who had information on where the rebels would and could relocate their base to and the contingency plans if they ran into trouble.  Basically a person, who, if captured by Commander Alecia Beck (the main villain) would spell disaster for the Rebellion.

First thing I loved about the book was the way that the prologue (and later I found the epilogue too) are set during the time period of Star Wars: The Force Awakens.  You meet Han Solo as an "old man" in the prologue and it's pretty obvious that this "old man" is none other than the one Han Solo, about to tell a story regarding the speed of the Millennium Falcon.  The prologue is enough to get anybody who is a fan of Han Solo and Chewbacca hooked into the story that follows.

Greg Rucka does an amazing job at capturing the dialogue with Han.  Every time Han spoke I could hear Harrison Ford's voice, especially between him and Chewie.  Also, when Han kept referring to Princess Leia by a variety of nicknames including "Your Shining Royalness" it sounded as if it had been taken out of deleted scenes from A New Hope.  Han knows how to get Princess Leia worked up and he does so wonderfully, which is totally in his character.  Two thumbs up for Rucka on this!

Han's character also goes through some character development, which is always a great thing to include in a novel. It adds depth to the story and makes the novel more than just a fun adventure; it reveals a deeper meaning to life.  A great novel will not only tell a fun story, but comment on and suggest to the reader a deeper meaning to life.  In this novel, trust is revealed as containing deeper meaning than Han originally understands.  Han learns a bit about how to trust, something he's never been good at.  At a certain point in the story, Han and Ematt are discussing how the bounty hunters found them and Ematt points out it might not only be by betrayal (even though unfortunately it was, sort of).  The following dialogue is my favorite out of the whole book:

"Betrayal isn't the only option."
"Yeah, well, it's the one I'm used to."
"I feel sorry for you, then.  Trust is as precious as it is rare, but you only get it by giving it."
Ematt was sounding an awful lot like the old man had.
"Trust isn't given, it's earned," Solo said.  "Like friendship."
"You must be very lonely," Ematt said.
Solo didn't respond.
(excerpt taken from page 119, emphasis added)

This is part of Han's growth as a character and we see this growth in The Empire Strikes Back when Han is way more trusting (in Luke and in Princess Leia) than he ever was in A New Hope.

Last thing I want to mention about this book is that my favorite character in the book is someone I was not expecting.  I, of course, love Han and Chewie, but they weren't my favorite characters in this book.  My favorite character was Torrent.  I loved meeting Torrent.  Torrent (or TX-828) was a stormtrooper in Commander Alecia Beck's company.  He was a clone, probably one of the very few who was based off of the original Kamino-produced template (Jango Fett).  I enjoyed the fact that we were introduced to his character and rather than just being a normal stormtrooper, we got to see him take off his helmet, reveal his nickname from his off-time in the barracks, and pretty much rock his job as a stormtrooper; he even was a good shot unlike most of the other stormtroopers.  Torrent brought humanity and personality into the stormtroopers and that was fun to read.

Star Wars: Smuggler's run is a must-read for anyone interested in the new novels as we Journey to Star Wars: The Force Awakens.  I give it my whole-hearted approval.
Posted by Unknown at 8:43 PM