Why I Love Star Wars So Much

"Why do you love Star Wars so much?"

I was asked this question recently and have been pondering whether my answer adequately spoke the to the depth of how much Star Wars truly does mean to me.  Many people would respond to this question in a generic, superficial, pop-culture sort of way.  Star Wars is popular now more than ever (if the Box Office records The Force Awakens broke are any indication).  It is definitely a fun and engaging galaxy to like and enjoy and to love, where the characters are rich and real, the story is deep and emotional, and the nature of human life and love it explores is just as good as many of the great sagas of our day (Lord of the Rings, Harry Potter, and dare I say Star Trek ;), etc.)  Now I could also answer in that same sort of generic way, namely that Star Wars is a fun (lightsaber battles and The Force!), deep (Anakin's fall to the dark side and subsequent redemption by his son, Luke), and an emotional (Han and Leia's son Ben's fall to the dark side as Kylo Ren, who kills his dad) story that I find appealing, and indeed it is, but that is not why I love it so much.  Let me explain... and I know this may seem a bit strange, but bear with me.

My first introduction to Star Wars was back when I was in junior high school.  Star Wars: Attack of the Clones had just hit theaters and I was enthralled.  I loved it, perhaps not because it was an exciting movie (which it was, and I still love that movie, especially Jango Fett), but because it opened to me the world beyond the movie.  It introduced me to characters that I cared about and wanted to "hang out" with and get to know.  I began to watch the other movies and began reading the Legends novels as quickly as I could, particularly focusing on the events post Return of the Jedi.  I loved it all so much and particularly I loved the characters.  I saw in them traits that I wished I had myself, courage, strength of character, moral uprightness, and friends.  I even viewed the novels as my friends and would take every opportunity I had to read a chapter or two.  Star Wars was a great gift to me at that time and I loved every minute of it.

At this point in my personal life, I was in junior high and high school with relatively few friends.  Not that I was unlikeable, but I was a good student (thank you Mom and Dad) and many of my classmates resented me for it and rather than be my friend, I was bullied quite a lot.  Not physically, but definitely verbally.  I was called the "goodie-two-shoes" and the "teacher's pet" among other less than desirable names.  They made fun of me for various things (I was consistently picked last for teams in P.E.) and my love of Star Wars was also attacked.  They even wrote a horribly offensive note attacking me and said explicitly, "I can't write wookie so i hope you can understand what im writing."  Everything about me was stomped on.  The few friends that I had were never quite supportive outright when I was verbally attacked (except on a rare occasion).  I was alone and miserable.  Needless to say my time in junior high and high school was a tough and bitter time for me.  I felt worthless.  I felt like I was somehow corrupt at my very core because obviously my classmates could see the corruption and I couldn't.  Consequently, my love for Star Wars was something to be ashamed of and hidden because it only caused ridicule and shame.  I turned to academics as a way of trying to prove my goodness to the world (and to myself).  I thrived on academics and ended up becoming the valedictorian of my high school class, in a sense trying to show to myself that they were wrong about me.  Even so I never felt like I had human dignity, I never felt worthy of love.  My academic "success" left me feeling happy, yet empty.  (I do need to point out that I have wonderful and loving parents and siblings who helped me through this part of my life.  I would not be the man I am today without them!).


I became a closet Star Wars fan, always afraid if people knew how much I did like it, they would despise me, ridicule me, and tell me how stupid I was, even though I knew that must not be right.  As I went off to college this was true.  I continued to read the Legends novels as they were published and loved them, but again I didn't share that love with anyone.  New friends that I gained were often surprised when they saw my Star Wars book collection if they came over to my house.  I kept it to myself primarily.

Then something happened in my life that has changed me forever.  I entered the seminary and began my studies to eventually be ordained a Catholic priest (coming soon in May of 2016!).  Seminary formation has been the biggest grace and challenge in my entire life.  It has helped form me into the man I am today by helping me to pray and move closer to God, but also to grow on a human level as a man.  I was carrying so much garbage with me into seminary (low self-esteem, self-hatred, timidity, shame, lies regarding my own worth and dignity as a human person).  Slowly, after years in seminary, I began to understand that I wasn't corrupt like I had believed for years (ever since my time in junior high and high school).  I began to understand that I was a Beloved Son of God the Father and that very fact made me incredible precious in His sight.  No matter how anybody treated me, ever, could change that.  God helped me to look back on my life and see that my classmates, in bullying me, were not speaking to the truth of who I was, but who they were.  And rather than telling me that I was a corrupt and horrible person, they were telling me that they, themselves, were broken and lacking in love.  But I, in my adolescence, did not understand this truth and took on all the shame that wasn't mine to gain.  I let go of my resentment towards them and began to live out of the truth that I am loved by God and that is all that matters.

So, "how does Star Wars fit into all of this?" you may ask.  As I have embraced my identity as a Beloved Son of God the Father, I have come to realize that everything about me is precious and good (as long as I'm not sinning), including Star Wars.  The past year or so I have become vocal in my fandom for Star Wars.  I have realized that liking Star Wars is not a shameful thing, but it is actually a part of what makes me, me!  It is a hobby that I have and I am no longer ashamed of it.  Embracing my love for Star Wars is, in a real sense, a reclamation of my childlike innocence that I lost in junior high and high school.  After being bullied, I pushed that childlike wonder and awe in the galactic story of Star Wars aside because I thought it somehow made me detestable, and have only, in recent years, re-embraced that childlike wonder and awe in my fandom of Star Wars because I understand the truth about who I am.  This is why I created this website and podcast with my friend, Sean Heller.  It allows me to have a lot of fun with that pure, childlike attitude in a story that connects people all across the world. 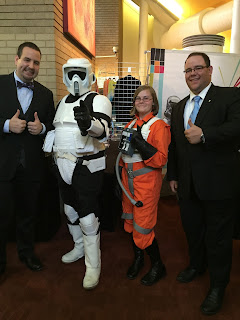 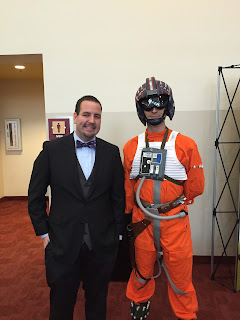 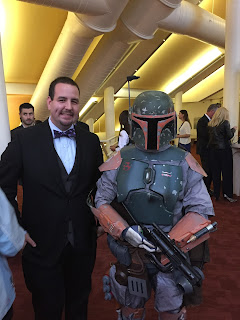 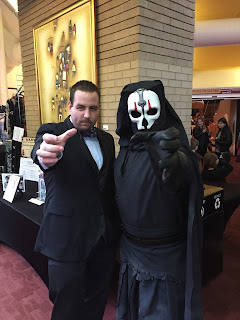 The above pictures were taken at the Colorado Symphony where they performed Star Wars music (May 2015).

So why do I love Star Wars so much?  Because it is a reminder to me of the purity and goodness within me as a beloved child of God.

Why do you love Star Wars?

May God bless you all!
Posted by Unknown at 8:10 PM