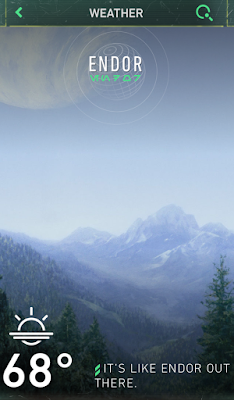 So, apparently if you've ever wanted to know how the Forest Moon of Endor feels like, just go to the Big Horn Mountains in Wyoming.

Yesterday, a Catholic priest friend, Fr. Brian Hess, and I headed up into the Big Horn Mountains to go camping.  Rather than just tent camping we had something else in mind for this trip.  We reserved and camped in the Sheep Mountain Lookout Tower, located in the Big Horn Mountains near Buffalo, WY.  This is a historic fire lookout tower constructed in 1950 which sits atop Sheep Mountain.  It served as a fire lookout tower until the early 1970's and has since been cleaned up and now anybody can go online and reserve it overnight to go camp up there.  It sits right at about 9,600 feet above sea level and the view is absolutely phenomenal.  The building itself is square with windows on all four sides so one can see out in every direction.

Being up in the mountains with the beautiful forest surrounding me I couldn't help but stand in admiration of God's handiwork in all of creation.  It is incredible what beauty nature holds.

That evening we saw three mule deer bucks as they scrounged around for food up near the tower.  The night sky was clear and since the full moon is close, we got a good view of the moon itself, but less so of a star-filled sky, which would have been awesome as well.  The morning brought a couple more deer to the area as we drank coffee and watched the sun rise higher into the sky.  I also took that opportunity to look up a geocache that was on the same mountain and find it. 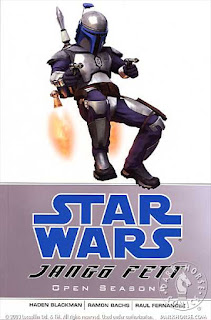 Since I had a little quiet time, I decided to catch up on some reading that I've been trying to do.  I finished my second read through of C.S. Lewis' Perelandra (2nd of his Space Trilogy), I am reading it with a friend.  When that was finished, I picked up and read Dark Horse Comics' Star Wars: Jango Fett - Open Seasons.  This comic has been on my shelf all summer to read and I'm pleased I finally got to it.  This is the second new Star Wars literature (new to me, not new in publish date) I've read this summer, the first being Christie Golden's new novel, Star Wars: Dark Disciple (which, by the way, was fantastic!  I hope to write a post on that too).  Anyways, I am a big fan of Jango Fett and I'm probably in the minority when I say this but I like him more than Boba Fett.  I think for me this is true because after seeing Star Wars: Attack of the Clones in theaters was when I really got into Star Wars and Jango Fett was a big part of the plot.  That being said anything in the Star Wars EU that explores Jango Fett is great by me.  The comic itself was good, giving his backstory and how he became the template for the clone army in Attack of the Clones.  This is of course one version of that story, with the video game, "Star Wars: Bounty Hunter" giving a different version.  Personally, I prefer the story in the video game since I owned and loved playing the PlayStation 2 version of "Bounty Hunter" when I was younger.  At any rate, the comic was enjoyable, although definitely too brief for my liking.  Maybe in the new canon Jango's character will be explored a bit more, but I won't get my hopes up.

All-in-all a fantastic little overnight trip into the Big Horn Mountains.  I love to get out and go camping and so this was a slightly different experience for me.  Ultimately I would say that my preference would be to camp near a mountain stream, but this kind of camping, perched atop a mountain, definitely had its own awesomeness too.  The beauty in creation and some great literature proved to be a good combination for me.